COMIC: I just wanted to dance 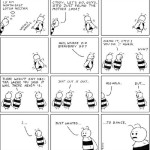 LISTEN: Dancing In the Dark: The Intelligence of Bees (54min)

Bees are remarkable among insects. They can count, remember human faces, and communicate through dance routines performed entirely in the dark. But are they intelligent? Even creative? Bee aficionado Stephen Humphrey, along with a hive of leading bee researchers and scientists, investigates the mental lives of bees.

“A new study of bees has come to the conclusion that bee swarm communication works similarly to that of neurons in the human brain.

The study, published in the December 9 issue of Science, found that bees use inhibitory “stop” signals to prohibit the scout bees from completing a waggle dance that helps bees learn the directions of competing sites for new hives. This behavior helps to ensure that the best homesite is found for the hive.

Thomas Seeley, a biologist from Cornell University, said this behavior is “analogous to how the nervous system works in complex brains. The brain has similar cross inhibitory signaling between neurons in decision-making circuits.”

To study this behavior the researchers set up swarms, one at a time, on an island off the coast of Maine that was devoid of natural nesting cavities. After setting out two identical nesting boxes, they labeled scout bees with two different paint colors. They then videotaped the scout bees doing the waggle dance. The dances were tracked by watching the scout bees with the marks by using microphones and videotape to tell when they received the stop signals and from which bees.

The team observed that the stop signals came from scouts that were marked at the other site.

Visscher said, “The message the sender scout is conveying to the dancer appears to be that the dancer should curb her enthusiasm, because there is another nest site worthy of consideration Such an inhibitory signal is not hostile. It’s simply saying, ‘Wait a minute, here’s something else to consider, so let’s not be hasty in recruiting every bee to a site that may not be the best one for the swarm. All the bees have a common interest in choosing the best available site.”

According to the press release once the bees decide to swarm and move to a new nesting site the message of the stop signal changes. Visscher says, “Apparently at this point, the message of the stop signal changes, and can be thought of as, ‘Stop dancing, it is time to get ready for the swarm to fly. It is important for the scouts to be with the swarm when it takes off, because they are responsible for guiding the flight to the nest site.”

[click here to view the full article on redorbit.com]

[click here to view similar articles on psypost.org and arstechnica.com]