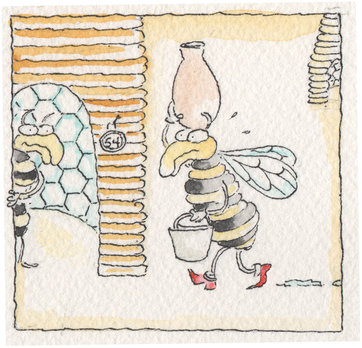 Q. Why are honeybees drinking water from my birdbath?

A. The birdbath may be closer to the hive than a natural source of water, said Cole Gilbert, a Cornell entomologist. Or the bees may have discovered it while foraging for nectar and pollen, then returned when conditions in the colony changed.

Bees collect water from many nonpure sources — even urine, by one report, Dr. Gilbert said — but prefer pure water, like that in a birdbath, when specifically foraging for it.

The most important factor in a hive’s water requirements is temperature control in the area where larvae are raised.

Water is collected by the same means as nectar, by sucking through the proboscis, Dr. Gilbert said. It is stored in the honey stomach, a pouch where nectar is also stored. “When foragers return to the hive, the water is regurgitated and passed by trophallaxis, a fancy word for mouth to mouth, from the forager bee to a younger hive bee,” he said.

While the hive bee smears droplets on the comb, other bees hang out near the hive entrance, fanning their wings to increase airflow through the hive. The vaporizing droplets remove heat.

When extra water is needed, a hive bee signals to a forager bee by refusing to take her nectar for some time. When it is eventually accepted, the forager bee looks for water on her next foray.