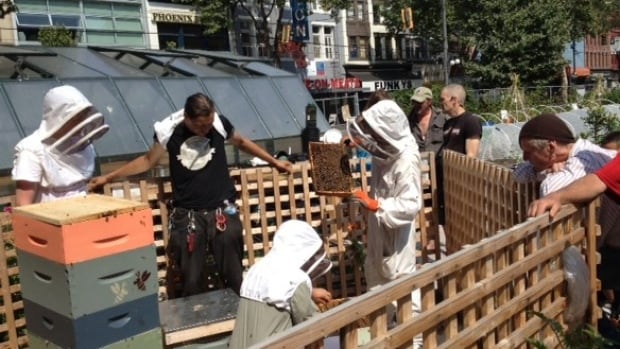 By North By Northwest, CBC News

Bees play an important role in the ecosystem, as they pollinate plants and produce honey, but it turns out they can also play a therapeutic role for humans.

Since 2012, Julia Common and her daughter Sarah have been engaging at-risk communities in urban beekeeping through their non-profit organization, Hives for Humanity.

Mother and daughter started by placing a colony of bees at a community garden on Vancouver’s Downtown Eastside.

“The community really quickly took ownership of that hive and responsibility for the protection and care of this living, breathing colony of working insects that are just this inspiration to everyone who sees them,” Sarah told North By Northwest‘s Sheryl MacKay.

The Commons say beekeeping is therapeutic because it brings people together and the responsibility gives them a sense of self worth and community pride.

“At the beginning, we thought it was the beekeeping, but then from beekeeping, other things come,” said Julia.

“The bees have wax, someone needs to [process] the wax. Other people come forward who want to help with equipment maintenance.”

Hives for Humanity now has almost a hundred hives placed in community gardens, the rooftops of single room occupancy hotels and people’s backyards.

“No matter where you are, people take great pride in taking care of the bees, keeping them safe,” said Julia.

“Everyone from kindergarten right up to somebody who is 92 realizes bees are threatened and they just feel wonderful that they’re playing their [part].”