READ: Beekeeping on it’s way to being legal in Long Beach! 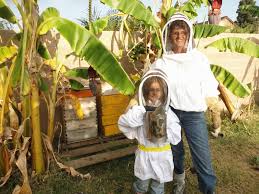 SO MOVED: Birds And Bees Among Urban Agriculture Issues Taken Up By City Council

A second attempt to allow more urban agriculture in Long Beach passed its first test Tuesday night when the City Council approved a request to the city attorney to create an ordinance amending the current law.

In March 2013, a draft was brought to the council to change rules for keeping chickens, goats and bees in residential areas. More work was done before a vote in July 2013, but the changes failed on a 4-3 vote, with two council members absent. The issue resurfaced, and four council members — Lena Gonzalez (First), Suja Lowenthal (Second), Daryl Supernaw (Fourth) and Dee Andrews (Sixth) — brought the idea back to the full council Tuesday.

In their letter to the rest of the council, the sponsors cited strides made to become a more livable city, including promoting healthy food choices, as the reason to reconsider the rules now…

NEXT STEPS:
City staff will provide City Council with the ordinance language and then the issue will be up for a final vote.