The City of Los Angeles will be spending up to $400,000 to re-sod their lawn….
Please take 30 seconds to sign the petition that asks them to plant sustainable landscaping instead of grass!! 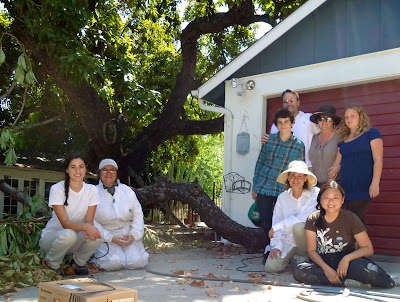 This hive came crashing to the ground unexpectedly. The avocado tree it was in is thought to be the second oldest avocado tree in Southern California and has being doing great for years. One day this Pasadena family heard a loud crashing sound as one of the tree limbs broke and hit the ground. Luckily no one was hurt.

A hive must have set up in the hollow of the dead tree limb. The colony didn’t seem to be fazed by the change in location and continued to fly in and out of the limb. It shocked the homeowner to find a beehive in addition to a 20 foot branch on the ground. Luckily they knew about us. And their son, Rory, knew one of our own beekeepers, Julia.

We arranged a time that Julia and her mother could meet Ceebs and me to relocate the hive to Julia’s nuc. Julia is working with bees and creating her senior project around them. Rory was interested In working with the bees so he also joined in with a loaner veil. His mom, dad and sister looked on from a distance and were very excited about the whole process.

We first took a chainsaw and opened up the branch and then Julia cut out the comb. It was tiny bunch of bees and they were super nice. They just kept on flying in and out despite the noise of the chainsaw.

There wasn’t much comb to save, but we did what we could. Julia returned at night and all the bees were inside the nuc. The bees are now with Julia and doing well but given their current size, the colony will need more bees to be able to make it through the winter. Julia is already working on getting another cutout to combine with this one. She’s a natural with the bees and will soon be able to mentor others—and she’s still in high school. 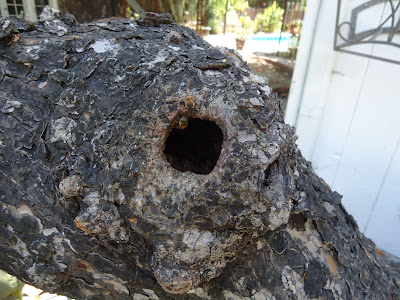 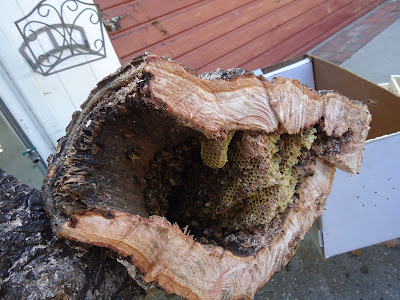 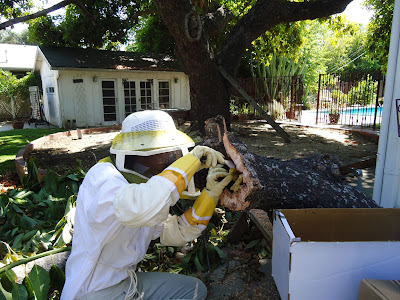 [click here to read the full article on backwards beekeepers] 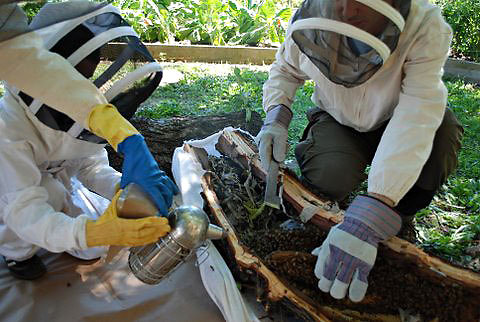 With wild bees an abundant resource here in Southern California, there’s always more than enough to go around.

Not so in New York City, apparently:

In a gale wind from [tropical storm Irene], a hollowed-out branch of an enormous tree was ripped off, exposing a hive of 30,000 to 40,000 honeybees. The hive’s discovery was a jackpot for the beekeeping community and word spread quickly on Facebook and Twitter that a feral hive was up for grabs.

Two beekeepers jumped at the chance to claim the bees, unknowingly setting off a feud between two of the city’s main beekeeping groups…

As throngs of beekeepers and the curious congregated within the thin piece of yellow caution tape roping off the area around the tree, tensions rose. And even as the wood chips were flying, the two beekeeping groups squabbled over how the rescue should be conducted and who the rightful owner of the bees was…

Mr. Fischer said he tried to halt the operation on Sunday because the high winds trailing the storm added to an already potent combination of stinging insects, heights and chain saws. But when his words were not heeded, he left the park.

“There was a lot more testosterone floating around than common sense,” he said. Around Bee Rescue, Honey and Rancor (NY Times Article) 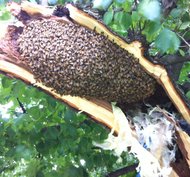 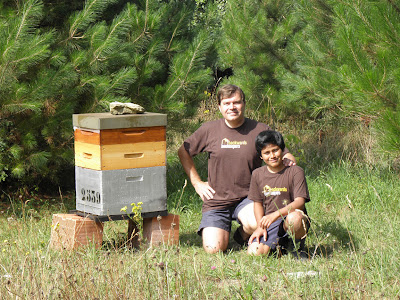 Friend-of-the-group Renaud keeps bees in Pénestin, France. He checks in with this photo of himself and his son Grégoire, both modeling Backwards Beekeepers apparel. 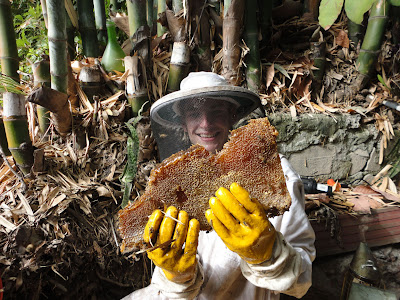 A call to the Bee Rescue Hotline sent us up to the Hollywood Hills to do a cut-out from an exterior garage wall. The homeowner said that the hive had been there for almost 20 years. There had also been two other hives on the property that other Backwards Beekeepers had removed.

Knowing that the hive had been there such a long time, we were surprised to find just one area with brood comb and an equal amount of space for just honey. It was funny how the bees had set up the hive: on the left of one wall stud was the brood and on the right (between the next set of studs) was the honey. There was very little crossover.

This hive was just barely hanging in there. Leah put the brood and bees into Rob’s handmade nucs and brought them to one of her queenless hives.

We checked the hive the next day and there were some bees on the comb, but not many. There were also a bunch of bees left in the wall that didn’t want to go into the nuc box that I had left there, so I’ll need to move them on another night.

Click here to see the full story on Backwards Beekeepers

Thanks for the sweet blog and tweet TEETOO! We love your work too!

“Honeylove, written by our dear friends Rob and Chelsea McFarland is another other blog I’m loving these days. Are these two adorable or what? Not only are they incredibly good looking, they are both multi-talented and super sweet. Rob and Chelsea post interesting bee related facts, videos and cute pictures on Honeylove  almost daily…” You do not need to live in Los Angeles to sign! Thanks!!!

“These industrious bees had created this beautiful hive in about two weeks! The comb was full of capped honey, brood, and lots of bees.

This was a great learning experience but the best part of this trap-out (that became a cut-out) is that we found the queen and gained a new Backwards Beekeeper!” 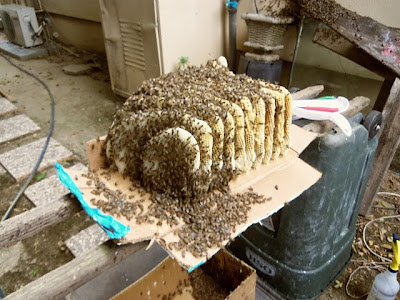 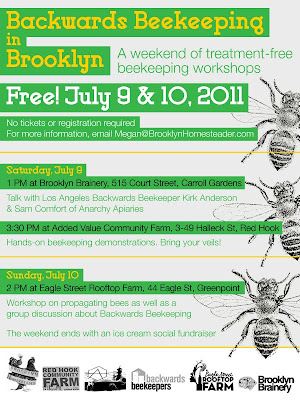 If you’re anywhere in the vicinity and want to learn about treatment-free beekeeping, Brooklyn is the place to be! 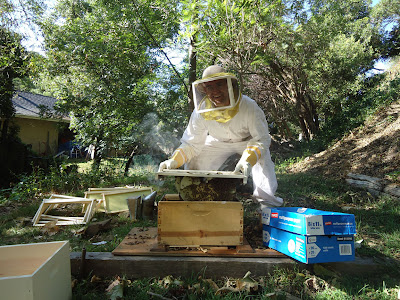 “I went over to Barrett’s place before the recent Backwards Beekeeping meeting to work on some projects we’ve set up. The first project that Barrett, his neighbor Dave, and I worked on were some bees in the base of the sycamore tree. The bees had been in the tree for about 2 years. After a month of trapping them out, it seemed like all the bees were out and now we wanted to see what was left in the hive….” [continue reading on BackwardsBeekeepers.com]